In 2011, the design.build studio was invited by NGO Caritas Vienna, to create a homebase and competence center, where the team of youngCaritas can provide knowledge, support and infrastructure to socially engaged young people. A place for workshops, meetings, benefit-events and lectures, where young volunteers can meet to organise social projects.

As initial part of the project we were also asked to find a location that is easily accessible by public transport and that has a strong public presence and visibility in the street.

We finally found a perfect site, a vacant railway arch, which was designed by Otto Wagner at the end of the 19th century, close to a public transport interchange and extremly open to the street.

For the arch, which at the highest point was over 10 metres high, the 25 students developed a freestanding, multi-story, functional furniture, which, like a spiral, was connecting many different functions on various platforms.

In the design phase the vacant arch was already used by the students as seminar- and classroom for the project, what gave them the rare opportunity, to develop the design right in the place you design for.

After 7 months of designing and applying for building permission, the students transfered their plans into built reality, which took them another 11 months.

Except for 2 steelbeams, the entire construction was made of wood, which was handcut and mounted on site by the students.

Since April 2013 the actionFabrik is operating and enjoys a high afflux of socially engaged people, using the infrastructure to work on various social-projects. 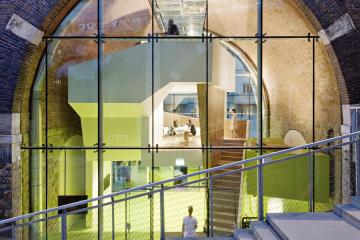 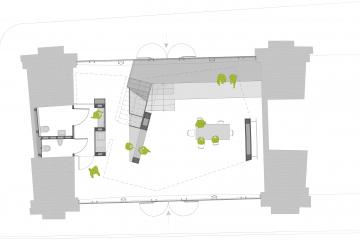