A project in co-operation with raumlabor Berlin and the Munich Kammerspiele.Everyone cant just sleep whereever they please! Or can they? Matthias Lilienthal, who assumed the role of Intendant of the Munich Kammerspiele for the 2016/2017 season, starts his time in office with the exciting Shabbyshabby Apartments project.

Together with the Berlin based architecture and art collective raumlabor, the project approaches the question of living and habitation in a booming town like Munich on a experimental art level. One hundred and twenty creatives have constructed a total of 24 Shabbys on a budget of 250 euros each within the Munich urban area that will be offered as little hotel apartments, bookable and habitable for one month.

The HOME building on Marstallplatz, in which the construction team will bring their designs to fruition, was constructed and shaped by students under the direction of the professorship for Architectural Design & Timber Construction from the TUM. The building was errected within two weeks.

A 900m² temporary Architecture Collective was developed for 80 participants and provided for their living, eating, cooking, wellbeing, office and workshop needs. The common areas with canteen and kitchen offered a semi open Piazzetta on the Marstallplatz which peaked the interest of passerbyers and offered community.

The focus of the construction methods was to use mostly readymade solutions like scaffolding and also huge recycle-paper-blocs as weight and walls which have been returned to its recycle circuit after usage. 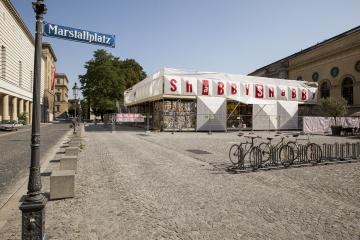 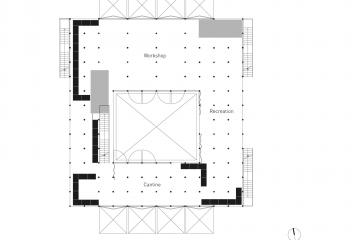 The content is liscensed under the following Creative Commons license.
All rights reserved.