“Keks”, a mobile, modular kiosk, was to be developed jointly by 25 students, built by them, and then operated by the same team in public space – in front of the university – for a three-week test period as a booth serving mulled wine and offering a daily programme of activities. To enhance the division of labour in the process as well as the complexity of the small-scale structure, the students were divided into six teams, each of which was assigned a square wall panel (244 x 244 cm) with a specific function to work on.

Finally, the perspective on the construction project in the “Keks” experiment was shifted on the opening day. Students had to switch seamlessly from the role of designers and builders, tools barely out of their hands, to the role of users and operators. In daily operation, they were able to ascertain the strengths and weaknesses of the small structure, and were also confronted with praise as well as criticism by various passers-by. Leaving the protective walls of the university and venturing out into public space was an essential aspect of the class. 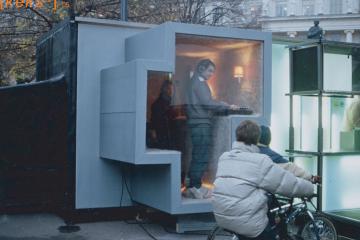