The story of the Oktibbeha County Heritage Museum’s Rain Garden Program is a story of community. The Museum itself is a volunteer run organization serving Oktibbeha County, which includes Mississippi State University. In 2009, faculty from Mississippi State University sat with museum board members to discuss a simple drainage problem. The result of that discussion and the several that followed was a new vision for the museum: “Celebrating the Past while Embracing the Future”. Faculty moved forward with students to create a 5 phase plan to re-create the landscape of the Heritage Museum into a high-performance green infrastructure demonstration site that would allow student to have hands-on experiences with facilities that did not exist anywhere in the region and be an example for how future development could manage stormwater. Over the next five years, 6 faculty from three departments worked with over 200 students to develop detailed plans and implement the site improvements. The museum board worked to secure funding and with faculty to leverage donations that ultimately equaled over $100,000. The improvements to the museum have created new life for the museum and its volunteers. Some visitors come to see the culture of the region and find out about green infrastructure, while others come to learn about green infrastructure and are exposed to the heritage of the county. Visits to the museum have doubled since the rain garden program began in 2009. The Museum offers programs on soil and water conservation to cub scouts, garden tours to garden clubs, and fieldtrips for schools. Beyond the green infrastructure improvements the site offers opportunities for the community to come together. The site has an outdoor amphitheater which student organizations use for movie nights and faculty for lectures about the garden. The SuperUse pavilion, which capped the project as the fifth phase, offers an eye-opening look into how adaptive reuse in architectural design and construction reduces energy use while offering exciting and unique spaces and places. The pavilion is available for families and organizations to use while enjoying and learning about the garden. 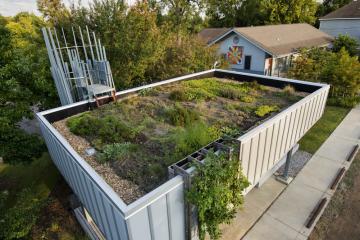 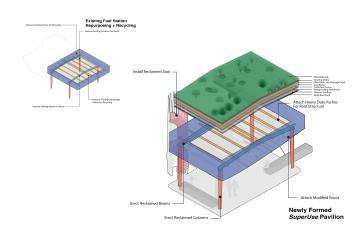 The superuse pavilion was conceived and designed as an act of contingency. Both the means and materials for construction were little known when the project was undertaken making for a truly open-ended design inquiry. Working in the mode of blended opportunism and improvisation the design processes is best characterized as an act of collage.

With foraged building materials and a program being only the support a green roof and outdoor activity, the pavilion responds to the situational logic of the site by offering a backstop to the gardens which are surrounded on three sides by busy city streets. The wedge shaped lot is bookended by the pavilions lower back edge which drops slightly to signify the terminus of the pedestrian grounds. In doing so the central gathering space of the nearby museum lawn is reinforced as the hub of activity. Below the sweeping ceiling of the pavilion integrated furniture including benches and a stage bound the pavilion floor offering a public venue for concerts, gathering, exhibitions, and other forms of outdoor event. Bands of acrylic replace ceiling boards and bench board to offer low-level lighting which may be supplemented by spot and task lighting as needed by the user. The growing extensive green roof system is made accessible by a reclaimed circular stair salvaged from a church prior to demolition. Reaching toward the sky the stair is clad in simple deck boards cut to a profile to create a tower like form while anchoring the pavilion’s corner. Vines drape from above on axis with the stair to hint at the hidden garden above while emphasizing the staircase terminating the entry axis at the rear. Complimenting the grounds in both aesthetic and spatial experience the pavilion adds to the public demonstration of green design and building. The SuperUse methodology attempts to demonstrate that being environmentally accountable does not require additional expense, only additional consideration.

Infrastructure is everywhere around us. Designers make decisions every day on the design of the most mundane artifacts of human civilization. From roads to sanitary sewers, infrastructure is often utilitarian at best. However, each elements is an opportunity to either degrade or improve our environment. Taken in isolation, a single gas station canopy is almost inconsequential, but collectively every awning in the U.S. is something to be considered. If every one of the 120,000 gas station canopies in the U.S. were to have a green roof like the one on the repurposed museum pavilion, they would be more than infrastructure, they would be part of the green networks of cities. Based on existing research, the 120,000+/- green roofed canopies would create 15 square miles of habitat, which is equal to about half the area of Manhattan. The habitat would be used by birds and insects while drivers would be filling cars 20 feet below. They would also help to improve watershed health by filtering pollutants and retaining over 3.6 billion gallons of rain per year. That amount of water could fill the Empire State Building over 14 times. With some irony they would also help to illuminate pollution by absorbing over 15 tons of carbon per year, or the equivalent of over 11,000 cars, which again would be filled 20 feet below.

The content is liscensed under the following Creative Commons license.
All rights reserved.