The Escaleras Oasis Tropical were realised in the framework of the Urban Lab Medellín I Berlin. As aThink&Do-Tank, this initiative aims to create a network of students of architecture and urban design, architects and planners as well as actors from the civil society, governing bodies, academia, the economy and cultural realm from Colombia and Germany through workshops, seminars, symposia and built interventions. It was initiated by three students of architecture, two of them recent graduates. In a close collaborations with lecturers from the Habitat Unit, TU Berlin and the Universidad Pontificia Bolivariana in Medellín the project was set up as a transdisciplinary laboratory.

Medellin and Berlin are characterised by very different regimes of planning and participation as well as formal and informal urban change processes. Yet these defining differences offer an opportunity to interrogate planning approaches in both contexts and develop new instruments: Can Urban Coding be a shared approach to guide transformation processes towards more inclusive, co-produced, sustainable and urban neighbourhoods?

As a first phase for an urban coding process a spring school was organised in March 2017 in the favela Moravia, Medellín.

During three weeks students and community leaders were working in mixed teams on a critical analysis and observation of the neighbourhood. An urban intervention, the renewal of one of the most important pathways in the neighbourhood - the Escaleras Oasis Tropical - had an important role in the process. The staircase with it´s 108 steps connects two important streets and was being completely run down over the years. Local residents considered it as a dangerous places due to many accidents and incidents that had happened and were fighting for a long time for it´s renovation. Within three weeks it was completely renewed by the community, students, local artists and experts.

The student teams from Berlin and Medellín were then reflecting on their experiences and developing proposals in the framework of two design Studios at their host institutions. The collaboration went on in July 2017 with a Summer School in Berlin. Community leaders from Moravia as well as the students from Medellín spent three weeks in Berlin to discuss their work and exchange ideas regarding the further process of the project and beyond. 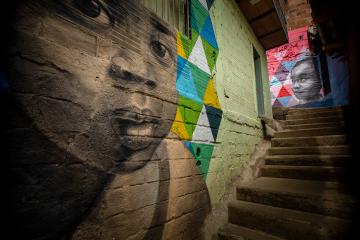