1330 Brook Street house an example of Studio 804’s mission to build creative sustainable housing in established, but marginal urban neighborhoods. 1330 Brook Street is convenient to the vibrant cultural district of downtown Lawrence and to the public transportation system and the bike trails that link the town. It is less than a block from the East Lawrence Recreation Center which offers a wide variety of services and is across the street from Brook Creek Park and its open green spaces, playgrounds and large mature trees.

It is a three bedroom, two bathroom, 1,300 square foot house that makes extensive use of salvaged material and minimizes energy consumption. Sixteen net metered solar panels on the roof provide up to 4.8 kilowatt-hours of power and will generate enough electricity to operate the house at net zero energy use over a calendar year.

Studio 804 has always been willing to build on brownfield and undesirable infill sites. This house was built on two small lots in the flood plain of Brook Creek. The previous owner had built up the property grade with compacted earth to create buildable ground above the flood plain. We purchased it for less than typical lot the established neighborhoods of Lawrence. This allowed us to target an innovative, LEED Platinum certified building that would still be relatively affordable.

The insulated metal panels that distinctively clad the house were rejects from the construction of a tennis center being built at the time on the western edge of Lawrence. The panels were perfectly functional but had been rejected due to an issue with the paint that we could resolve. When we began to shape a design around these panels we saw the parallel between Studio 804’s mission and the mission that inspired the prefabricated steel Lustron houses that were developed in the United States after World War II. They were a response to the lack of housing for veterans returning from the war. We wanted the house at 1330 Brook Street to share the spirit of the Lustron design as it serves as a model for how self-sustaining, low maintenance, fully accessible houses can be built for everyone in the future as resource management becomes increasingly necessary.

THIS HOUSE IS LEED PLATINUM CERTIFIED 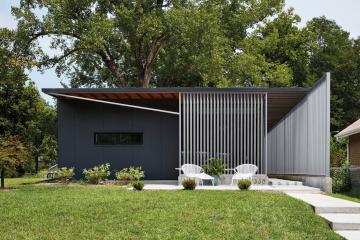 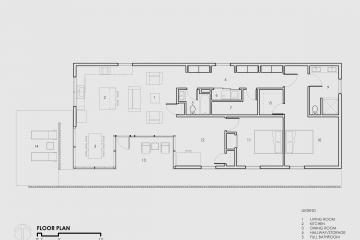 Studio 804 is a comprehensive one year fully hands on design build experience offered by the University of Kansas Department Of Architecture. We are leaders in sustainable design with eleven LEED Platinum projects and three Passive House certifications. Studio 804 is a not-for profit 501(c)3 corporation whose participants are graduate students committed to the continued research and development of affordable, sustainable and inventive building solutions. We design and build a new building every year. To learn more, visit the Studio 804 website: www.studio804.com.