The village of Santa Cruz Tepetotutla is located in Chinantla Alta, in the Sierra Norte of Oaxaca state, Mexico. At an altitude of over 3,000 meters above sea level, the area has one of the highest indices of biodiversity on the planet and is rich in natural resources. The largest ethnic group in the region is the Chinanteco, that still preserve their indigenous language but is slowly loosing many aspects of their cultural traditions due to the increasing number of migrant workers leaving the area starting from the coffee crisis of the 80’s . Their main economic activity is agriculture (self-sustaining). The community house was thought within the framework of the "Sustainable Territory Development Plan of the Chinantla Alta de Oaxaca", a spatial plan that was drafted by the communities themselves with the support of the Mexican NGO CAMPO a.c., with an intent to generate alternative sources of income to agriculture in the Chinantla region. In addition to a community centre, in fact, the building serves as a Guest House for tourists who are walking through the area on a well-known eco-tourism route through several indigenous communities of the Chinantla Alta. The objective of the project goes beyond the simple construction of a community house; it aims to create a cultural exchange between two differing realities (the indigenous community and the european students). This project was intended as a process through which the community of Santa Cruz  worked together with 16 students from the Universities of Naples, Milan and Warsaw, for the design and construction of a community house. The project was organized in 3 distinct phases:

1 (six months) in Naples, where students of the Faculty of Architecture designed different project proposals for the community, that chose the one responding to their needs;

2 (three months) in Santa Cruz, the communities hosted the students, and together, they built the house;

3 (six months) back to Naples and Milan, dissemination through a book, a documentary and exhibitions. 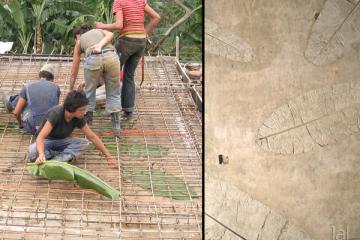 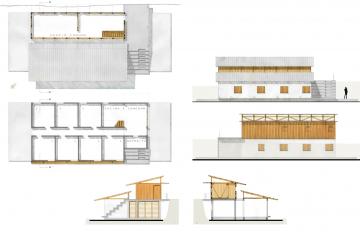 The building is built on a pre-existing foundation and, at the community’s request, the floor is made of reinforced concrete. The second floor is built of wood according to local tradition, supplemented with building innovations that contribute to higher stablity of the structure. The building consists of five bedrooms, a kitchen and a dining room on the main floor and a large multi-purpose living room where community meetings take place on the upper floor. The existing reinforced concrete structures were left incomplete due to lack of economic resources. Construction techniques were incorporated that could respond to the weather (intense and extended periods of rainfall) and to the local resources (materials and construction knowledge). Furthermore, then main goal of the project was to demonstrate through the wooden structure of the upper floor that with lower costs and less time a solid structure that was useful, comfortable and safe was possible. Some of the main architectonic features are cross ventilation, walls with air insulation and constructed with more breathable materials (wood), reduction of direct sun radiation on walls and a ventilated roof.