From the basic research to the completion of the building: In their master-thesis at the Faculty for Architecture and Planning at Vienna University of Technology Christoph Lachberger and David Kraler did the design and the realization of the Healthcare-Centre Mondikolok, which is financed and run by the NGO Osttirol für Jalimo.

In a first trip to South Sudan in 2012 basic research about building-techniques, building-culture, culture, ethnologic and sociological topics and the medical setting was done. Based on the outcome, spatial and functional needs, ecology and other architectural aspects the building was designed and could finally be built together with local workers and Austrian volunteers from September 2013 to spring 2015.

Although the traditioal houses in the region of Kajo-Keji made out of mud and grass, called tukul, have been adapted to climate and life already for ages, they have one big problem: termites.

Most local people try to beat those nasty animals by poisoning the soil or using „permanent“ material like steel and concrete, which has negative effects to ecology, indoor climate and finally is even causing financial problems for many people: as the majority of the Kuku-people is living as peasants, buying industrialized material is much more difficult than collecting mud, timber, bamboo and gras in the bush for free.

In order to reduce the amount of industrialized materials and to benefit from the potential of natural and local resources, principles of physical termite-control have been studied, adapted and implemented at the very beginning of the design-process:

To minimize the potential points of termite-attack the roof is separated strictly from the solid building underneath. As a second step two or four oblique columns are combined on one base to reduce the critical points to an absolute minimum. Finally a special design of those bases with termite shields shall handicap termites to climb up to the timber. Moreover the separation of the roof and the usage of massive mud-walls and a newly developed mud-steel-composite ceiling helps to get a pleasant indoor-climate.

From the first research up to the construction-work local people have been involved as good as possible. Especially the skills and knowledge of masons and local craftsmen of wood- and metal-workshops gave a very positive input to the project. 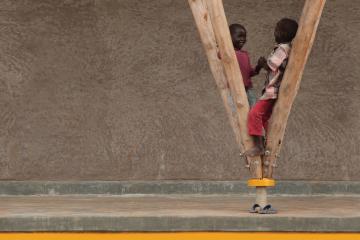 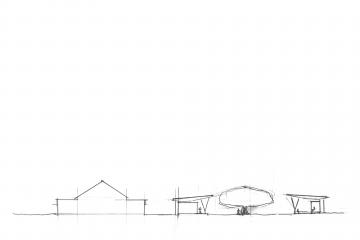